- October 20, 2010
I know some of these are from a week or so ago but I don’t always get to my Comic Pusher on every Wednesday.  Hey I’m a busy Faerie, computers and networks won’t sparkle themselves and someone has to eat the last Reese’s cup in your candy stash.  Anyway, on to my picks from this haul and other random ones I grabbed off the shelf that caught my eye. 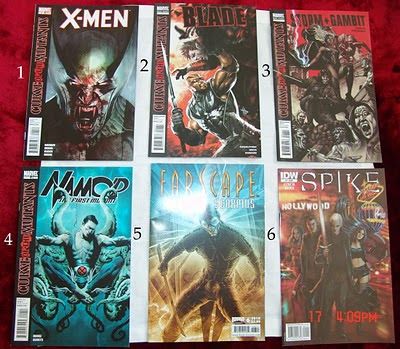 1 – X-Men: Curse of the Mutants #4
Marvel
Written By: Victor Gischler
Penciled by: Paco Medina
Inked by: Juan Vlasco
Colored by: Marte Garcia
I have been drooling about this series coming out all summer long.  I am in love with Vampires, just not the sparklie kind.  I am talking about the Lost Boys, no holds barred, Blade movies, do what you want, kick arse kind of Vampires!  I first read an X-Men/Vampires comic back in ‘90 something that centered on Storm being transformed by Dracula himself that was a one shot deal.  Later on in the late ‘90s that idea was revisited on the premise that Storm was still a Vampire and how she was living her life as such.  I think it was a 4 part comic but I’d have to check.  I just love this whole theme and I was super psyched to see it coming back.  How awesome is it that Wolverine’s mug would be gracing the cover in just this manor.  He’s all ready a don’t mess with him kind of guy, now he’s even more destructive as a Vamp!
2 – Blade: Curse of the Mutants #1 (One Shot)
Marvel
Written by: Duan Swierczynski
Art by: Tim Green
Colors by: Nathan Fairbairn
Vampire stories always need Blade.  Like the movie said he’s got all their strengths and none of their weaknesses.   And you can’t do a Vampire Marvel story without him.  On the flip through I was pulled in by the art.  It was reminiscent of the kind of art I grew up with in the 80s and 90s as a kid.  Course the paper and the ink is better today.  It has that simplicity that packs so much punch that I love.
3 – Storm and Gambit: Curse of the Mutants #1 (One Shot)
Marvel
Written by: Chuck Kim
Penciled by: Chris Bachalo
Inked by: Tim Townsend, Jaime Mendoza, Wayne Faucher, al Vey, Victor Olazaba, Mark Irwin, and Chris Bachalo
Colored by: Antonio Fabella and Chris Bachalo
This was the pairing of my youth from that revisit of the Vampire comic I spoke about above.  Only in the revisit Storm and Gambit were Vampires.  This one has them kicking Vampire butt and taking names.  No disappointment here.
4 – Namor: Curse of the Mutants #1 (One Shot)
Marvel
Written by: Stuart Moore
Art by: Ariel Olivetti
Vampire Merfolk!!  SQUEEEEE!!  Okay I think I have made you all tired of my Vampire obsession.  Moving on to something else.
5 – Farscape: Scorpius #6
Boom!
Story by: Rockne S. O’Bannon
Script by: David Alan Mack
Artwork by: Gordon Purcell
Color by: Nolan Woodard
If you have never seen the show Farscape you need to run out right now and pick up all 4 seasons and the movie Peacekeeper Wars.  You are missing out if you are not up on this show or this comic.  I love baddies with accents and personally I don’t think any villain comes to within an inch of the awesome that is Scorpius.  Trust me you have never met anyone more calculating, more collected, and more vicious to attain his goals than you have with Scorpius.  You will fall in love and might actually root for him.  Or maybe just be hooked like me.  Now go run out and get the DVDs, movie, and all the comics.  Why are you still here?
6 – Spike #1
IDW
Written by: Brian Lynch
Artwork by: Franco Urru
Color by: Andrea Priorini
I know I said enough with the Vampire theme but this is Spike, totally different Vampire.  I did a flip through in the comic store and I about died laughing when I got to the Twinkle picture.  I won’t forfeit any details but all I have to say is this is classic Spike in the Whedon spirit.  Kudos to Brian Lynch and if you aren’t following him on Twitter you need to do that right now. 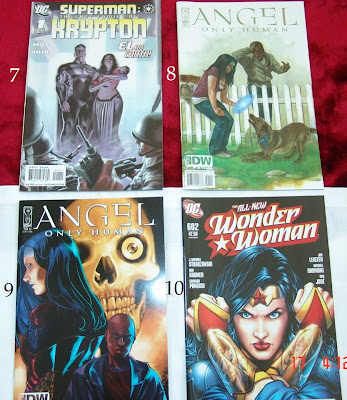 7 – Superman: the Last Family of Krypton #1
DC
Written by: Cary Bates
Artwork by: Renato Arlem
Color by: Allen Parsealaqua
What if Superman’s parents escaped to Earth with him?  What if they were around to raise him?  How would the world be different with that influence sooner in our lives?  I don’t know about you but I am stoked to see where this can lead.  And fear not the Kent’s are involved as well
8 & 9 – Angel: Only Human #1
IDW
Written by: Scott Lobdell
Artwork by: David Messina
Colored by: Mirco Pierfederici and Ilaria Traversi
I grabbed both covers this one and I am horribly behind on the Angel comic series.  This was a frivolous purchase but sometimes I like to grab books that I know I’ll get around to reading once I pick up the rest of the series.  I was sad to see Fred’s character go and be replaced by Illyria in the series but it was fun to watch Illyria attempt to live in today’s world.  This story follows Gunn and Illyria aka Blue as they head to see Fred’s parents.  Nothing could go wrong here.  Right?
10 – Wonder Woman #602
DC
Written by: J. Michael Straczynski
Pencil by: Don Kramer with Eduardo Pansica
Inked by: Jay Leisten, Michael Babinski, and Ruy Jose
Colored by: Alex Sinclair
I know I know.  Booooo!  Hisss!  Evil Wonder Woman costume change!  Shame shame!  I get it.  But it is Wonder Woman and I had to know how the story was going to go despite all my hang ups with her costume change.  Wonder Woman doesn’t need pockets.  However she does kick some serious arse and take names.  She’s Wonder Woman; it’s in the job description.
Boom comic haul comics DC IDW Marvel

Chronic Geek said…
I've been into the Marvel vampire series too! I also get Wonder Woman regularly and I actually have grown to like the costume as the story evolved.

Let's Chat - Gotham, Rise of the Villians: Worse than a Crime Season 2 Episode 11

- December 02, 2015
What did you think about Gotham, Rise of the Villains: Worse than a Crime episode?  Let's discuss in the comments.
Read more